...you want to look on-trend and unique...at the same time.

Customize!  When I started monogramming bath towels (we highly recommend the Matouk Factory Store for bed and bath) with custom embroidered initials (in a rainbow of colors by Carol Leach's "Initials on Wednesday" in Natick), little did I realize I was participating in a movement called "Mass Customization" - essentially customizing a mass-produced product, in color, design or otherwise, to be unique to moi.
The concept isn't a new one but the method in which it's been recently deployed by fashion world -  from Louis Vuitton’s Mon Monogram to Nike's nikeid.com -  is changing the face of consumer interaction.  Business of Fashion states, on the one hand, purchasing luxury fashion is about being “in fashion” and participating in a group movement.  But on the other hand, it’s about expressing uniqueness.  It’s a concept that Anna Wintour captured particularly well in the August 2008 issue of Vogue, noting in her editor’s letter that what’s admired in fashion is people simultaneously “looking on-trend and beyond trend and totally themselves.”
One of my faves right now is New Balance's custom 574 booth.  Right in our own backyard at the Natick Mall and one of only two venues for this new custom venture, you can walk right up and with the help of a New Balance associate, create your own 574 from a myriad of colors and materials.  The design gets sent off the factory, most likely in Maine, and made to your specs.  Who could resist channeling her/his inner designer with these one of a kind kicks M&M candy colors, luscious leathers and funky laces? 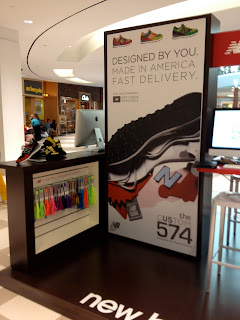 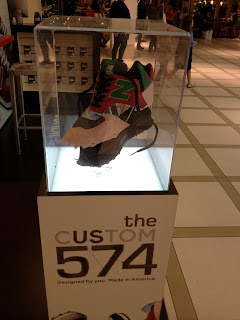 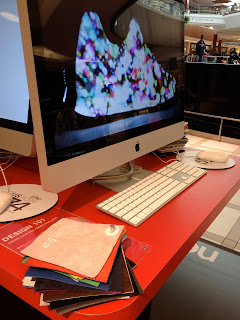 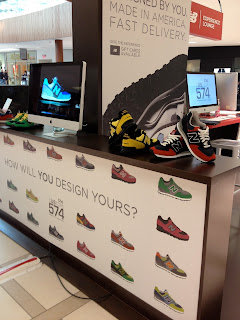 Photos from LB.
When it comes to handbags, Jen and I both lean heavily toward the simple Goyard tote.  I knew I wanted a classic shape with easy access and traditional color but when it came to how to customize it, I had no idea.  Classic? Crazy?  Business of Fashion notes...."Back when craft production was the dominant economic activity, luxury goods makers offered their clients more than a list of possible options from which they were to configure their own products. Alongside an array of options, they offered expert advice that was tailored to the individual, with whom they often had a personal relationship. Indeed, when a client went to a master craftsman, product design was a collaborative process that usually got better over time."
Fast forward to 2011 and enter George DiVenuti, the Goyard Specialist at Barney's in Boston.  He patiently walked me through the dozens of possible combos and helped me decide on this one.  And when it arrived a few weeks later...voila!  Perfection...and a very happy customer. 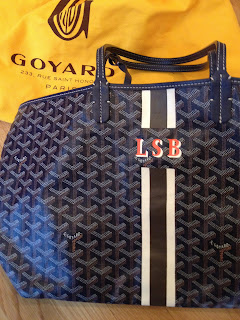 Photo from LB
How will you channel your inner designer in 2012? ~ LB
Posted by Lisa Bida and Jennifer Houston at 10:25 AM

Lisa Bida and Jennifer Houston
Two friends, with hours of phone calls and dozens of emails about fashion, outfits, and attire, decided to write it down. Want us to address a fashion question on our blog? Email us at lisa@what2wearwhen.net or jen@what2wearwhen.net.

Receive our blog posts via email